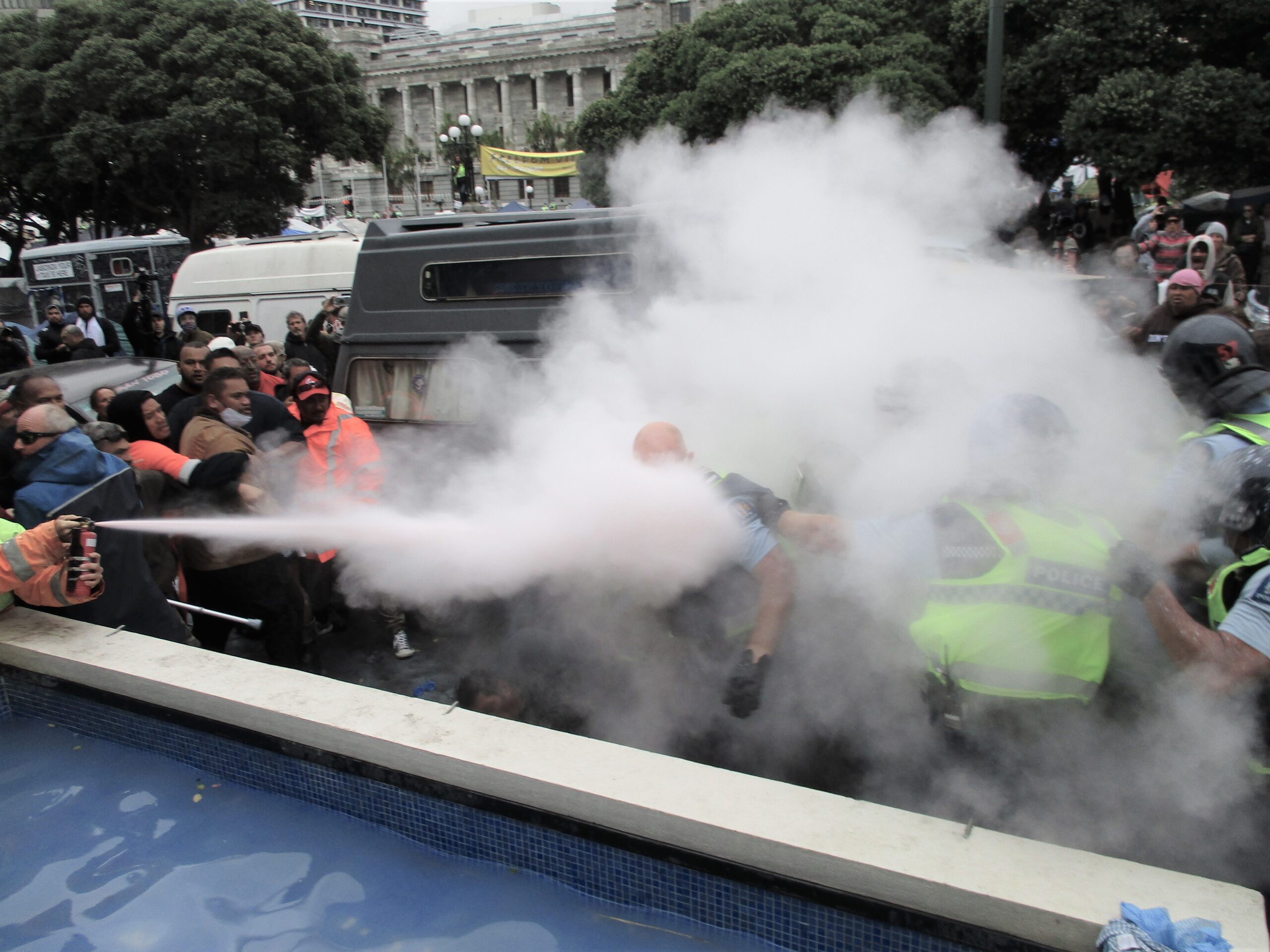 Wellington, 2 March 2022: New Zealand Police escalated their siege strategy shortly before 6am Wednesday 2 March, when approximately 200 police, located themselves at four points around the perimeter of the occupied zone that surrounds the beleagured nation’s Parliament.

The occupation of Parliament Grounds — that began on February 8, when an anti-Covid mandate convoy converged on the central business district of the South Pacific archipelago’s capital city — developed into an occupied zone complete with the infrastructure of a small village.

Before dawn, Police in entered the north western end of Parliament Grounds and positioned themselves on the forecourt of the Parliament Library.

The main frontline formed by police is on the intersection at Molesworth, Hill and Aitken streets, which was the scene of the sudden and unnecessary use of riot shield-wielding police the previous week on Tuesday 22 February.

As they ran down Hill Street, one policeman pushed a Māori man out of his way with a police-issue riot shield, while another shoved his wahine into a port-o-loo, leaving a scrape above her right eye.

Police assaulted numerous protesters with pepper spray at the Molesworth Street intersection, and began their modus operandi of picking off the occasional victim for arrest.

Police, with riot shields, also formed a cordon on Featherston Street at the back of Victoria’s University’s Law Faculty, which is inside the occupied territory. A fourth cordon was formed on the intersection of Lambton Quay and Whitmore and Bowen Street.

These two cordons were diversions, to buy them time while more police assembled at the northern borders of the occupied zone.

Vehicles were moved in behind the concrete bollards in case police moved in with a truck and winch to lift the blocks away.

Meanwhile, a hi-definition camera with sound amplifier was moved into position at the corner of Molesworth and Aitken streets, across the road from the Archives New Zealand building.

At approximately 8:30am, police with riot shields pushed forward against a line of protesters at the top of Molesworth Street. A fracas ensued as police pushed forward. Four police grabbed a builder — who passed up a career as a mathematician in banking., and he was pulled back by other protesters.

Amid this fracas, one policeman was pulled away from the police line as it surged adjacent to an outdoor paddling pool. The isolated policeman was dragged backward a distance of five metres along the pavement, and held there a short time.

With panicked looks on their faces, some police wanted to rush forward to attempt to retrieve him while he was under a pile of men. But they were unable to reach him.

A few moments later, the policeman was released after the protesters made their point, that they could have laid blows into him, but exercised restraint.

He scurried back to the police line.

Some police officers tried to continue down Molesworth Street in the direction of the outdoor camp kitchens. But they were repelled when the would-be mathematician-turned builder shot a burst of white gas from a fire extinguisher.

The police retreated back up Molesworth Street, parallel to the main frontline.

A helicopter has patrolled from the sky since shortly before 6am.

By around 2pm, the police had reduced their numbers on Molesworth Street and the helicopter had ceased circling overhead, for a short time.

However, in a presser conference Police Commissioner Andrew Coster said that the purpose of the operation underway was to end the occupation.