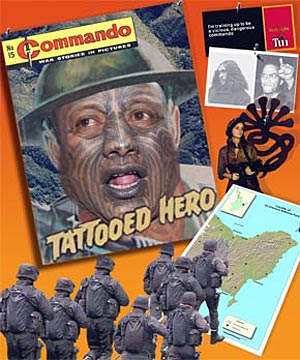 New Zealand’s National Security State, including the Police, scapegoated of most visible face of Tūhoe, Tame Iti, with a terrorist guerilla legend and a pseudo-commando character casting to de-risk the Crown losing sovereignty over a substantial tract of territory.

The ‘Operation Eight’ police paramilitary raids of October 15 2007 unleashed 300 police officers breaking into and searching 60 homes around New Zealand, including in Auckland, Hamilton, Taupo, Wellington, Christchurch and two small rural Tūhoe communities, Tāneatua and Rūātoki, which bore the brunt of the intrusions. Rūātoki was locked down by masked heavily armed members of the Police Armed Offenders Squad (AOS) and the Northern Special Tactics Group (STG), who detained people at gunpoint, including men, women and children who were not even suspects. Police arrested 17 indigenous, anarchist, environmental and anti-war activists and took into custody people from Tūhoe, Te Atiawa, Maniapoto and Ngā Puhi, along with a few token Pākehā to share in the Deep State’s vindictive need for politically correct subterfuge. Only two people in Rūātoki were arrested with Terrorism charges.

The key finding of The Snoopman’s investigation, “Tame Iti as the Crown’s new scapegoat to resolve multiple crises” is that New Zealand’s Deep State deftly scripted a successful B-Grade multi-season News Special psy-op – Operation Eight – that re-framed Te Urewera wilderness as a place where para-military terrorism training camps were being conducted. The vicious intention in this re-framing exercise was to shift the political center of gravity away from the very real possibility that Tūhoe would gain substantive sovereignty through the return of their native estate. To re-frame Te Urewera wilderness with a terror news frame, a perennial fixture in the Neo-Colonial Realm of New Zealand was activated by the national security state apparatus through the news media, the courts and the executive branch of government: the propagandist scapegoat mechanism.

Because Tūhoe had a strong case for a return of their ancestral lands, especially as the iwi never signed the Treaty, the Crown pursued a pys-op strategy to derail the tribe’s objective to avoid conferring Native Title to the Urewera wilderness. Such an outcome would have been catastrophic for the Crown, because every other iwi and hapū would have demanded a return of mountains, lakes and rivers, unencumbered by Crown jurisdiction – regardless of whether they had settled or not.

This vicious psychological projection demonstrates that New Zealand’s Deep State had applied the ‘lessons learned’ from the collapse of their previous multi-season psy-op news special in mid-2007 – the persecution of Algerian-born academic, Ahmed Zaoui, whom the state had considered a terrorist threat for nearly five years. Because the N.Z. Deep State avoided publicly disclosing that Zaoui had been framed as a terrorist guerilla leader by the Algerian secret service, whom inserted this malicious legend into the French, Belgium and Swiss intelligence agencies – the Crown Police were able to re-script this violent revolutionary idea to cast Tame Iti with a terrorist guerilla legend.

By casting activist-artist Tame Iti as a terrorist guerilla leader with a nationwide network, the National Security State essentially transposed the same legend that had been created by Algeria’s equivalent to the CIA, the Département du Renseignement et de la Sécurité – or DRS – to frame the Algerian-born Muslim asylum seeker, Ahmed Zaoui, onto Tūhoe’s most visible face to scapegoat.

It turns out, N.Z.’s National Security State suppressed the mid-2007 testimony of former-DRS agent Lieutenant Colonel Mohamed Samraoui, who supplied evidence to New Zealand’s Inspector General for Security & Intelligence, Justice Paul Neazor, that he had framed Algerian academic and asylum seeker Ahmed Zaoui as a terrorist – as journalist Sewlyn Manning proved in his 2012 documentary, Behind the Shroud: Juxtapositioning Truth, Intelligence and Tradecraft. New Zealand’s Security Intelligence Service (SIS) had ‘relied’ on planted intelligence from Belgium, France and Switzerland. These were the same intelligence agencies involved in the 1985 Rainbow Warrior Bombing – which was inflicted five years before Operation Gladio was exposed (and ultimately was proven by Swiss historian Daniel Ganser to have been a three-decade reign of terror mete-out by every NATO country on their own civilian populations to shift the political centre of gravity away from socialist governments by blaming left-wing communists).

Instead of fessing up to the public, SIS Director Warren Tucker issued a deceptive communiqué on September 13th 2007 insinuating that Zaoui participated in and led terrorist networks in France and Belgium, and claimed he was deported from Switzerland for making statements to incite violence. With this deceitful, malicious communiqué spread over the news wires, the SIS director was telegraphing the direction where the National Security State was taking. The Crown faced a looming catastrophic collapse of its sole sovereign power because if Tūhoe had gained the sovereign Māori title to the Ureweras, the state would have likely been overwhelmed with demands from other iwi and hapu for the return of tracts of land, regardless of whether or not they had signed the 1840 Waitangi Treaty or had already settled. Therefore, because the collapse of the Clark Ministry’s efforts to bring the anti-Muslim Global War on Terror zeitgeist to New Zealand converged with a looming governance crisis, the New Zealand Crown fell back to its perennial default position: casting Māori as the enemy of the state since 1840.

This crisis of legitimacy converged with the Crown’s need to lower expectations among Tūhoe about the return of lands stolen in the process of state formation.

The raids – which involved the Police Special Investigation Group (SIG), the Armed Offenders Squads, the counter-terrorism units Special Tactics Group, the Security Intelligence Service (SIS) – were signed off by the Officials Committee for Domestic and External Security Co-ordination (ODESC). This Officials Committee comprises the chief executives of the Defence Force, the Ministry of Defence, the Security Intelligence Service, the Government Communications Security Bureau, the Police, the Ministry of Civil Defence and Emergency Management, the Ministry of Foreign Affairs and Trade, the Treasury and others. The head of the Prime Minister’s Department, Maarten Wevers, heads the group, while Prime Minister Helen Clark and other senior ministers were briefed on the impending raids.

Therefore, N.Z.’s Deep State displayed a comprehension of statecraft in the form of low-grade psychological warfare designed to achieve the same result as the NATO states low-grade war using false flag terrorism, wherein communist groups were blamed for bombings to shift the political center of gravity away from socialism and associating peace and freedom with liberal democracy that masks stealthy Neo-Colonial Capitalism. In the case of Operation Eight, a succession faction of Tūhoe were associated with a radical, violent ‘fringe group’ because their most visible personality – Tame Iti – was cast with the guerilla terrorist legend by the Deep State faction of N.Z.’s national security, whom needed to justify their existence.