Pimp My Shot: Pfizer’s top owners — Blackrock and Vanguard — are top shareholders of parent companies that own The New Zealand Herald, Newshub and Newstalk ZB on ❛NZ Monopoly Game❜ board 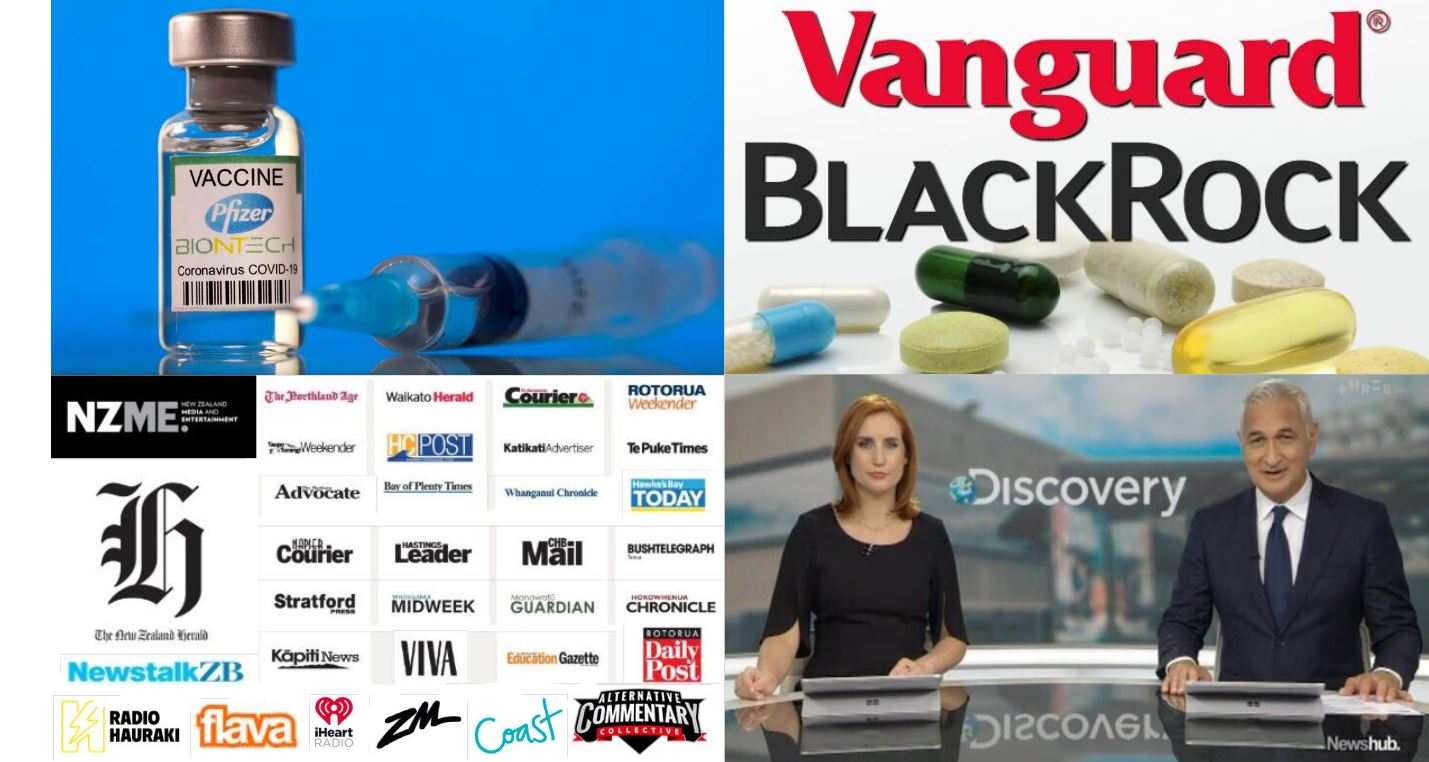 In this exposé, numerous New Zealand newsrooms, including The New Zealand Herald, Newshub and Newstalk ZB are shown to share the same ultimate owners as the pharmaceutical manufacturer, Pfizer.

The top three owners of JPMorgan Chase Bank and CitiGroup include the two massive financial institutions, Vanguard Group and Blackrock, that in turn are among the top three shareholders of Pfizer.

The news brand, Newshub, as well as The Project, The Nation, and Channel Three are owned Discovery New Zealand, that is a subsidiary of the media corporation, Discovery Inc., and which is owned by the parent corporation, AT&T. The two biggest owners of AT&T, are Blackrock and Vanguard.

NZME and Discovery are deeply embroiled in the New Zealand Government’s drive to jab 90% of the eligible population. Yet, like other newsrooms, NZME and Discovery have failed to seriously investigate the other side of the story — in keeping with the priniciple of freedom of expression.

➼ Same Firms Own Pfizer, Own Stakes in Many NZ Newsrooms

News brands that are well known to New Zealanders, particularly in the North Island, such as The New Zealand Herald, The Waikato Herald, The Bay of Plenty Times, The Whanganui Chronicle, The Manawatu Guardian, The Northern Age, and The Roturua Daily Post, and NewsTalk ZB are owned by NZME. Among the top three owners of this New Zealand-based media corporation are three transnational banks, JPMorgan Chase Bank, CitiGroup and HSBC.

In turn, the top three owners of JPMorgan Chase Bank and CitiGroup include the huge financial institutions, Blackrock and Vanguard, that in turn are both in the top three shareholders of Pfizer.

In December 2020, the media corporation, Discovery Inc., bought MediaWorks’ television properties, including Newshub, as well as The Project, The Nation, and Channel Three following months of acquisition negotiations that become public in June of 2020. Discovery and Warner Media, which owns CNN, were subsequently merged by their parent corporation, AT&T in May 2021.

Likewise, the two biggest owners of Discovery Inc., are also Vanguard and Blackrock.

As the world’s largest institutional investors, it is perhaps not surprising to find that Vanguard and Blackrock are among the top owners of each other’s corporate empires. Vanguard has the biggest stake in Blackrock, controlling a 7.57% shareholding, while Blackrock is the largest shareholder in American Vanguard Group, controlling a 13.45% stake.

The wealth, reach and power of Blackrock and Vanguard are immense.

In the documentary — “MONOPOLY: Who Owns the World?” — Tim Gielen shows that Vanguard and Blackrock are at the zenith of ownership stakes across every major industry that dominate the Western Empire.

MONOPOLY shows that Vanguard and Blackrock owns the biggest stakes not only in Pfizer, but other Big Pharma companies such as AstraZeneca, Moderna, Johnson & Johnson, Bayer and Pfizer’s vaccine development partner, BioNTech.

➼ News Filtering as Predicted by the Propaganda Model

Yet, the news media continues to present an unbalanced, biased and inaccurate picture to their New Zealand’s news audiences, including the media properties owned by NZME and Discovery.

This bias can be seen in vaccination projects actively promoted by The New Zealand Herald, NewsTalk ZB and Newshub, among other news outlets.

The New Zealand Herald has launched ‘The 90% Project’ with the slogan, “Let’s Vaccinate NZ by Xmas”, which actively promotes the New Zealand Government’s coercive vaccine mandates, imposed on teachers, doctors and nurses on October 11 2021.

‘The 90% Project’ also backs the economic blackmail that underpins the impending vaccine passport system, which is linked to a so-called traffic light system — itself designed to replace the existing regional lockdown alert level system — once the nation reaches the vaccination 90% target.

This 90% target is a measure of the eligible population. The government has led New Zealanders to believe this metric applies to all humans aged 12 years of age and older — at present.

This meant Pfizer had marketing access for its merchandise on a foreign-owned TV network, Discovery, as well as a foreign-owned NZ-based media company, NZME, with two dozen newspapers, ten radio stations and three magazines — whose ultimate top owners are the same as the vaccine manufacturer, and whose big New Zealand customer, the NZ Government, had network coverage on the Crown-owned flagship TV network TVNZ, and the Crown-owned indigenous broadcaster, Māori Television.

These key findings regarding the ownership links between NZME’s media brands and Discovery New Zealand’s media properties, to the top shareholders of Pfizer, add potency to the abject failure of their N.Z.-based newsrooms to investigate the credible counter-voices in New Zealand — and around the world — that continue to challenge the core tenets of the ‘Covid-19 Pandemic’ hegemonic bloc.

By comparison, the news media’s scant coverage of the Freedom Rallies that took place the same day at many locations across New Zealand, meant that the nation’s newsrooms biased the mission was to pimp Pfizer’s merchandise.

The extent of the Freedom Movement’s diversity, scale and breadth of groups was, therefore, denied to the South Pacific archipelago’s manipulated news audiences. The news media also failed to interview the doctors from New Zealand Doctors Speaking Out with Science (NZDSOS), who spoke at the Freedom Rally at Auckland Domain, where at around 5000 humans were gathered, rather the 2000 reported by all Establishment Media newsrooms.

Like other New Zealand newsrooms, the Covid-19 pandemic reportage by Discovery New Zealand’s and NZME’s newsrooms of the lockdown measures, vaccine rollout and the new vaccine mandates, passports and traffic light system have all stayed within the limits of acceptable discussion — as predicted by the Propaganda Model.

The reasons for the lack of critical counter-voices in news coverage are described by five news filtering mechanisms presented in the Propaganda Model by Professor Noam Chomsky and Edward S. Herman — who theorized for news censorship in free societies in their 1988 book, Manufacturing Consent: The Political Economy of the Mass Media.

The Propaganda Model is comprised of five news filters through which news is processed for mass consumption: [1] size, ownership and profit orientation; [2] advertising; [3] expert sources; [4] flak and the enforcers; and [5] ideology.

Because NZME and Discovery New Zealand are themselves part of a market dominating media cartel comprised of seven top-tier New Zealand-based media corporations, the majority of the South Pacific archipelago’s news audiences have been served biased pandemic perspectives.

And because media firms are unique among all industries for their dependence on advertising revenues, advertising works as an ever present influence over media outlets to filter the news.

But, many media firms took hits on advertising revenues during the unfolding pandemic media hype, along with falling print media circulation sales and the burden of carrying staff amid the lockdown measures.

As such, the Propaganda Model’s first two news filters [1] size, ownership and profit orientation and [2] advertising appear to be exerting powerful influence over Discovery NZ’s TV3 television network, as well as NZME’s New Zealand Herald, NewsTalk ZB and many regional newspapers across the North Island of New Zealand.

This devotion of resources demonstrates a wide, uncritical acceptance of the Covid-19 Pandemic narrative as a propagandist sales effort.

This situation of mass societal psychosis — the psychic epidemic of madness — reflects the fact that New Zealand’s media-scape has actively promoted the official Covid Pandemic narrative, which has been maliciously driven by a Global Health Syndicate and unwisely adopted by most of the member states of the United Nations.

This psychic epidemic of madness also reflects the successful contagion of scientism that has been spread via the global newschain, and has formed a hegemonic ideological block. This ideology of scientism, which excludes critical counter-voices, including dissenting scientists, doctors and nurses, as well as other experts who could also supplying counter-evidence.

Governments are worsening the real emergency, which involves the dismissal of known therapeutics, biasing mass deployment of poorly-tested harmful experimental nano-gene injections, and fostering a politicization of medicine, public health and personal health choices — as a Covid Pandemic Panel of scientists and doctors stated recently in San Juan Puerto Rico.

In a recent pod-cast – Session 3: First Do No Harm at the Doctors for Covid Ethics Symposium – hosted by the independent news platform, UK Column, Professor of Communication at the University of Munich, Michael Meyen, observed that governments have gained the support of the establishment media as powerful allies.

Meanwhile, the key news media outlets have regained audiences they lost to the ‘independent media’. Professor Meyen stated that if the establishment media did their jobs properly, there would be no pandemic since it has been state and corporate owned media around the planet that has determined the over-hyped reality of the pandemic.

In this way, the Global Media Cartel has constructed an irrational adherence to scientism, which means ‘the news’ has been weaponized to act as a vector for the transmission of this form of ideological belief. Therefore, the fifth news filtering mechanism of the Propaganda Model — ideology — has worked as a powerful arbitrator for censorship across so-called Western ‘liberal democracies’.

Consequently, news audiences across the mangled civilization of New Zealand have been served poorly by newsrooms that have not only failed to seriously investigate the credible counter-evidence, interview expert dissenting voices and tell the ‘other side of the story’ — in keeping with the principle of freedom of expression and free speech rights.

New Zealand’s newsrooms have also failed to do ‘due diligence’ to check whether or not the nation — along with other member states of the United Nations — is being gamed to serve far-reaching geo-political strategies.

Because — as New Zealand pivots deeper into medical martial law, most New Zealanders have yet to grasp the fact that the coming vaccine passports are the entry point to fuse a social credit scoring system, a carbon tax transactions system and a new digital global monetary system interfacing with mobile phones .

The behavior modifications that have occurred so far — such as submitting to nationwide house arrest, social distancing, swab testing, QR-code mass surveillance, long queues for food, watching daily advisories and mass vaccinations — have presaged the objective to segregate society with a stealthy medical apartheid system.

Steve ‘Snoopman’ Edwards  is a dissident journalist, who worked at indigenous broadcaster, Māori Television, for 14 years as an editor of news, current affairs and general programmes. He forged his ‘Thunk Evil Without Being Evil’ super-power while writing his ground-breaking thesis on the Global Financial Crisis (GFC), titled – “It’s the financial oligarchy, stupid”– to figure out the means, modus operandi and motives of the Anglo-American Oligarchy.

Editor’s Note: If we have made any errors, please contact our intern, Steve Edwards, with your counter-evidence. e: steveedwards108[at]protonmail.com

MONOPOLY: Who Owns the World? – https://www.nutritruth.org/single-post/monopoly-who-owns-the-world-best-documentary-ever

Dr David Martin with Reiner Fuellmich – There is no variant… not novel… no pandemic >> https://forbiddenknowledgetv.net/there-is-no-variant-not-novel-no-pandemic-dr-david-martin-with-reiner-fuellmich/

Dr Geert Vanden Bossche (July 27 2021). A last word of caution to all those pretending the Covid-19 pandemic is toning down >> https://www.geertvandenbossche.org/post/a-last-word-of-caution-to-all-those-pretending-the-covid-19-pandemic-is-toning-down

Your Guide to The Great Reset >> https://www.corbettreport.com/greatreset/

Whitney Webb. (April 20, 2020). Techno-Tyranny: How The US National Security State Is Using Coronavirus To Fulfill An Orwellian Vision >> https://www.thelastamericanvagabond.com/techno-tyranny-how-us-national-security-state-using-coronavirus-fulfill-orwellian-vision/

Catherine Austin Fitts: The (Covid) Pandemic is a Front for a Global Financial Coup that Needs “Vaccine Passports” to Implement the New Digital “Currency” >> https://thereisnopandemic.net/2021/08/23/catherine-austin-fitts-the-covid-pandemic-is-a-front-for-a-global-financial-coup-that-needs-vaccine-passports-to-implement-the-new-digital-currency/

Alison Hawver McDowell October 14, 2021 COVID-19 as a Weapon. The Crushing of the Disposable Working Class – by Design https://www.wrongkindofgreen.org/2020/04/13/covid-19-as-a-weapon-the-crushing-of-the-disposable-working-class-by-design/?fbclid=IwAR0dNQVP1NURJ8xdsBOD3UICrLIhdRi59w9EODkJYtneA8jAkqo6MBO5TeI

COVID-19 as a Weapon. The Crushing of the Disposable Working Class – by Design https://www.wrongkindofgreen.org/2020/04/13/covid-19-as-a-weapon-the-crushing-of-the-disposable-working-class-by-design/?fbclid=IwAR0dNQVP1NURJ8xdsBOD3UICrLIhdRi59w9EODkJYtneA8jAkqo6MBO5TeI

Brave Vandana Shiva Speaks Out Against the Great Reset https://truthpeep.com/brave-vandana-shiva-speaks-out-against-the-great-reset/26/11/2020/

NZ Corona Cartel — TV3 Network❜s parent company is owned by Blackrock and Vanguard, which also own top stakes in Pfizer

The Matador: John Key & His Flag of Tricks