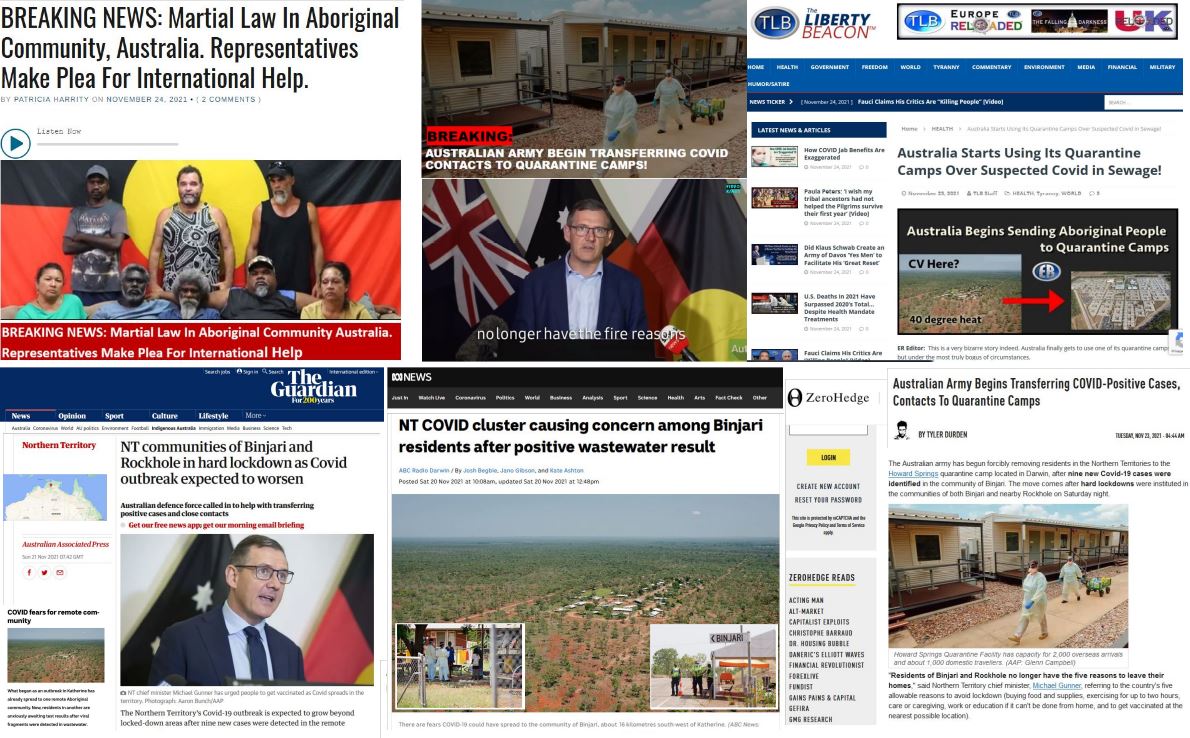 The Australian army were used in a Corona quarantine operation to remove four dozen indigenous Australians residents from the two communities in the Northern Territory this week, after nine ‘Covid-19 cases’ were allegedly identified in the community of Binjari.

The residents of Binjari and nearby Rockhole were taken to the Howard Springs quarantine camp located near Darwin, after hard lock-downs were enforced in the communities on the Saturday evening of November 20.

Northern Territory Chief Minister Michael Gunner announced on Monday November 22 that the “Residents of Binjari and Rockhole no longer have the so-called ‘five reasons’ to leave their homes.”

The five allowable reasons to avoid lock-down that he referred to are buying food and supplies, exercising for up to two hours, care or care-giving, work, or education.

“They can only leave for medical treatment, in an emergency, or as required by law.” said Gunner.

The forced re-location occurred after the so-called COVID-19 ‘tests’ were alleged to have detected traces of the coronavirus in waste-water at a treatment plant in nearby township of Katherine.

“We urge people to come forward to get screened and swabbed and then also get advice on vaccination, get vaccinated if you can. It’s the best way to protect yourself from this disease and from the community,” said Sigrid McGuinness from the Katherine West Health Board.

“We are grateful for the support of about 20 ADF personnel, as well as army trucks to assist with the transfer of positive cases and close contacts – and to support the communities. We are doing an assessment today of what extra resources we might need from the Feds, and the Prime Minister is ready to help further – I thank him for that.”

“We’re conscious of the fact that this can have some impacts on people’s mental health as well as their general well being,” Police Commissioner Jamie Chalkner told NT News.

Five days ago, NT Senator Malarndirri McCarthy told ABC that over crowding in Indigenous communities was a “massive problem,” pointing to the region’s second cluster of new infections – which included nine members of McCarthy’s direct family, including her sister who flew from Katherine to Robinson River while unknowingly bringing COVID-19 with her, per the report.

“If we could get housing in there right now, I would be pushing that straight away to the federal government and the NT government to work on that, but we obviously need the resources to do so,” she said.

Of the nine new cases in Binjari, four are women and five are men, including a 78-year-old woman who has been transported to Darwin Hospital.

There were zero new COVID-19 cases reported on Sunday.

Minister Gunner claimed he was worried about ‘mingling between households’ in Binjari and Rockhole, whose populations are around 220 and 130 respectively.

On Sunday, Gunner said: “Yes, these are strong measures, but the threat to lives is extreme.”

In this way, Gunner ironically deployed an inoculation tactic, followed by the fear-porn emotional hijacking staple of the Corona Panic-demic.

Inoculation is a public relations (PR) tactic where the weakness of the matter at hand is acknowledged, then quickly brushed aside. The intention is that news audiences thinks nothing more of it, satisfied that there is nothing under-handed to see, as the 2008 documentary The Hollow Men about dirty politics in New Zealand showed.

This hard lock-down and removal of indigenous Australians led to calls by tribal elders — including ‘David’ of a group referring to itself as the Original Sovereign Tribe Federation and also Darwin-based indigenous leader Aunty June Mills — for help from Australians and international intervention.

David claimed that the Australian Defence Force and Police had been using coercion and force to get the “genocidal weapon” into the sovereign tribal people of Australia, including children in several communities. In an interview with Café Locked Out, June Mills also expressed such concerns, but said she was unable to confirm the anecdotes, and stated help was needed on the ground to establish what had occurred, free the detained, and to hold the line.

As the spokesman for the Original Sovereign Tribe Federation, David warned that what happens in Australia is a dry run for the rest of the world to comply with the New World Order agenda of totalitarian control.

The spokesman for the Original Sovereign Tribe Federation claimed that the real agenda in Australia that underpinned the terror, torture and tyranny was a land, water and resource grab, with an intention to wipe-out the indigenous population with the ‘vaccine’ bio-weapon and reduce Australia’s population by 15 million, as The Stew Peters Show reported on November 24.

Australia has earned the infamous dishonor of being considered a bellwether of tyranny for the West, due to the State of Victoria having been subjected to the world’s hardest and continuous lockdown, and because Australia’s police have frequently inflicted brutal acts of violence, and awhile, it’s political elite deliver(ed) unnecessary measures packaged with condescending paternalism.

The concern expressed is that because Australia is considered the bellwether of tyranny for the West, this apparent chess move to remove indigenous Australians may signal a new stage for detaining citizens domiciled in Australia, rather than simply those returning from overseas.

Indeed, David referred to Candace Owens’ recent facetiously rhetorical call for America to deploy troops to Australia to liberate the country from the tyrannical regime. The Daily Wire Africa-American broadcaster’s call was widely reported by the Global Media Cartel, including Forbes, Yahoo and MSN, as though she were seriously proposing America invade Australia.

In the broadcast on The Daily Wire, Owens did actually say her call for US invasion of Australia was in jest, while she was serious in her appraisal of Western governments whom had waged a global war upon the world.

Those calls come amid a broader cry, dubbed “Official SOS from Australia!”, for help from the international ‘friends’ across the planet to stage a Worldwide Protest, Saturday December 4.

And the impostion of house arrest of last Saturday evening followed huge protests across Australia, including a massive march and rally in Melbourne — which was coordinated with an International Freedom Rally Day, to protest digital ‘vaccine’ passports, ‘vaccine’ mandates and other draconian panic-demic measures.

Ironically, Australia — like most of the other United Nations’ member governments — are worsening the real emergency, which involves the dismissal of known therapeutics, biasing mass deployment of poorly-tested harmful experimental nano-gene injections, and fostering a politicization of medicine, public health and personal health choices — as a Covid Pandemic Panel of scientists and doctors stated recently in San Juan Puerto Rico.

While the genocidal depopulation agenda has been widely ridiculed, the evidence is mounting that the choice of the coronavirus spike protein as the active ingredient in the so-called ‘vaccines’ is causing coronary arterial inflammation, blood clotting and even catastrophic vital organ failure the heart, lungs and brain.

The damage being inflicted upon humanity is epic in scale has been described by German virologist Dr. Sucharit Bhakdi of Doctors for Covid Ethics in an interview with Dr Joseph Mercola, as well as Karen Kingston and Dr. Carrie Madej on the Dr Brian Ardis Show and also South African-based natural science biologist and GP Dr Shankara Chetty. Meanwhile, Dr David Martin has tracked the patent-trail to weaponize the spike protein of the coronavirus to make it pathogenic to humans.

The far-reaching impacts are being inflicted with wilful professional failure of the hippocratic oath, regulatory capture of health authorities across the world, and a conspiracy to accumulate to power, wealth and control.

It would appear then, that Australia’s heritage as a former penal colony of the British Masonic Empire and as the home of the world’s longest continuous indigenous culture — has been weaponized by the global elite in keeping with their trademark ironic metaphor-laden evil humor. Australia, it seems, has been cast as the bellwether jurisdiction of the Fourth British Masonic Empire, while a universal empire is forged amid a global war waged on humanity.

Steve ‘Snoopman’ Edwards  is a Pākehā independent journalist, who worked at indigenous broadcaster, Māori Television, for 14 years as an editor of news, current affairs and general programmes. He forged his ‘Thunk Evil Without Being Evil’ super-power while writing his ground-breaking thesis on the Global Financial Crisis (GFC), titled – “It’s the financial oligarchy, stupid”– to figure out the means, modus operandi and motives of the Anglo-American Oligarchy.

Editor’s Note: If we have made any errors, please contact our administrator, Steve Edwards, with your counter-evidence. e: steveedwards108[at]protonmail.com

NT communities of Binjari and Rockhole in hard lockdown as Covid outbreak expected to worsen https://www.theguardian.com/australia-news/2021/nov/21/nt-communities-of-binjari-and-rockhole-in-hard-lockdown-as-covid-outbreak-expected-to-worsen

Dr David Martin with Reiner Fuellmich – There is no variant… not novel… no pandemic >> https://forbiddenknowledgetv.net/there-is-no-variant-not-novel-no-pandemic-dr-david-martin-with-reiner-fuellmich/

Catherine Austin Fitts: The (Covid) Pandemic is a Front for a Global Financial Coup that Needs “Vaccine Passports” to Implement the New Digital “Currency”. https://thereisnopandemic.net/2021/08/23/catherine-austin-fitts-the-covid-pandemic-is-a-front-for-a-global-financial-coup-that-needs-vaccine-passports-to-implement-the-new-digital-currency/