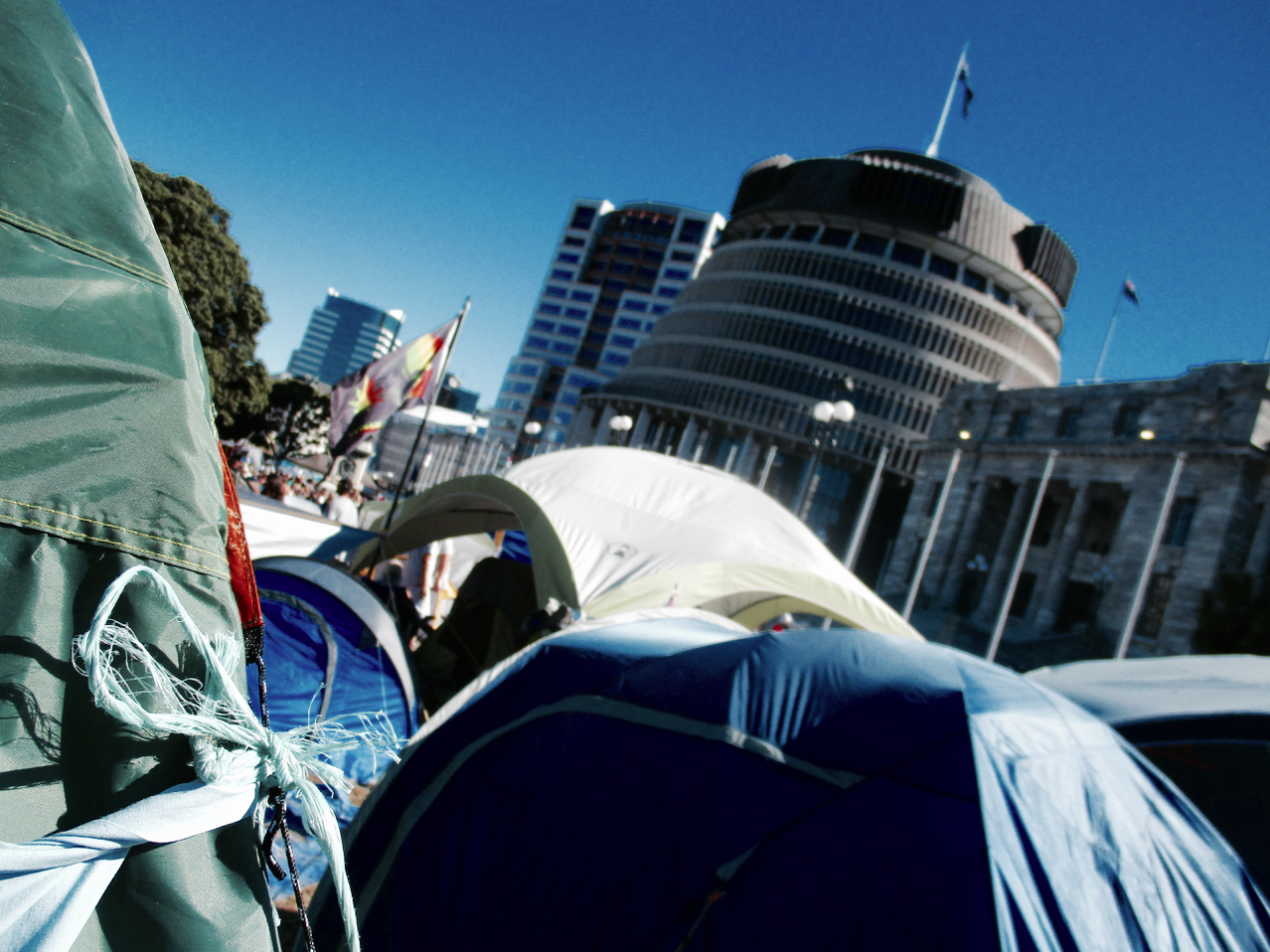 This photographic ‘essay’ presents the scale, diversity and structure of the anti-mandate/pro-freedom occupation at the New Zealand Parliament, up to the end of Thursday 17 February 2022.

The occupation of New Zealand’s Parliament Grounds in the capital city of Wellington and surrounding streets —which began at lunchtime on February 8th 2022 — appears to be growing into a bona-fide grass-roots peaceful uprising.

By Thursday 17 February, it was estimated there 10,000 people either occupying the grounds, or the surrounding streets and supporting the occupation while staying with friends, family or at accomodation in the city.

After sustaining repeated assaults from Police on Day 3 of their occupation, the New Zealand Liberty Movement’s presence swelled, as people came from all over the country, to ensure the numbers tipped the balance of power in favour of the occupation. The objective to pressure the NZ Government to drop the Covid-19 ‘vaccine’ mandates regime is primarily being actuated by their key bargaining chip: bad optics.

By sustaining an occupation of the Parliament Grounds, and surrounding streets, the NZ Liberty Movement provides bad optics for the government — because the imagery of a peaceful groundswell appearing to grow exponentially into an uprising — depletes the Government’s ‘political capital’.

For Totalitarians — who advance a Techno-Feudal World Order agenda — to be seen with tents, vehicles and political dissidents occupying land — is bad optics for their shiny, fake public images.

An occupation of Old Government House grounds, as well as the grounds on which the Beehive and Parliament House stand, also confronts NZ’s media cartel with a challenge. NZ’s media cartel have yet to accurately explain why so many New Zealanders don’t buy the propaganda they spun for the Government, the UN and global elite for two years.

Ironically, NZ Prime Minister Jacinda Ardern avoided visiting a high profile occupation of ancestral Māori land on the Ihumātao Pennisula in 2019 — which was confiscated during the New Zealand Masonic Revolutionary War of 1860-72 — as The Snoopman reported in 2019.

Ardern’s avoidance to visit the Protect Ihumātao occupation group was sustained to maintain her political capital, or voter credit, despite being invited to visit by the occupiers and in spite of the PM flying in and out of the nearby Auckland International Airport.

With each passing day, the Ardern Coalition Government is faced with open rebellion in their front yard from a cross-section of New Zealand Civilization — including many races, cultures and creeds, as well as wealth, professions and trades, and ages, sexuality and others differences.

Everyone has stories of how the ‘pandemic’ measures have impacted their lives, as well as perspectives on the situation New Zealand finds itself in — whether they are vaxxed or unvaxxed.

Steve ‘Snoopman’ Edwards is a dissident journalist, who worked at indigenous broadcaster, Māori Television, for 14 years as an editor of news, current affairs and general programmes. He forged his ‘Thunk Evil Without Being Evil’ super-power while writing his ground-breaking thesis on the Global Financial Crisis (GFC), titled — “It’s the financial oligarchy, stupid” — to figure out the means, modus operandi and motives of the Anglo-American Oligarchy.

Editor’s Note: If we have made any errors, please contact our administrator, Steve Edwards, with your counter-evidence. e: steveedwards108[at]protonmail.com