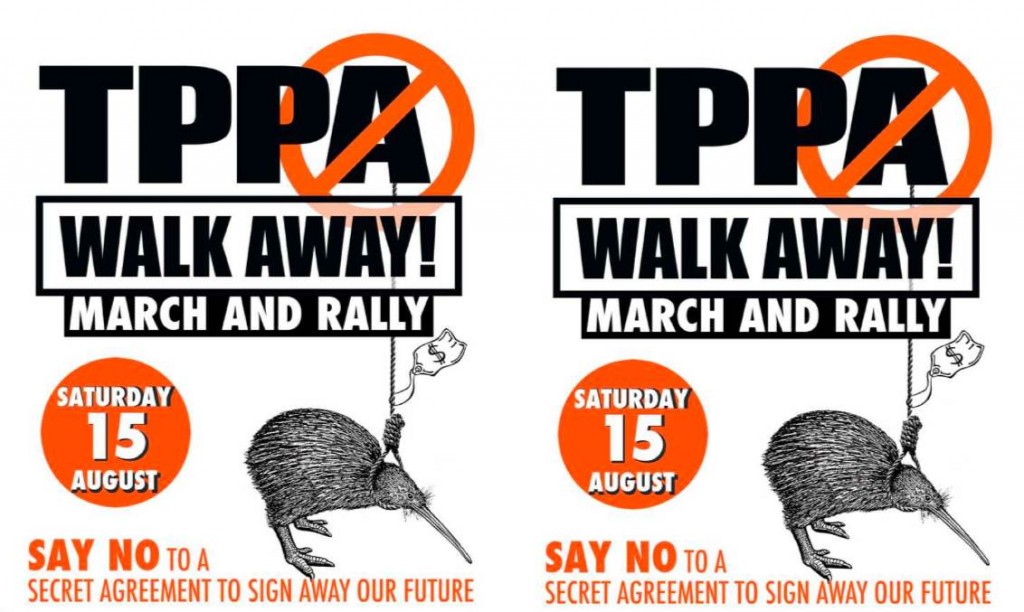 New Zealand’s Minister of Trade Tim Groser asserts a persistently arrogant attitude and dangerously anti-democratic behaviour in regard to the ongoing Trans-Pacific Partnership Agreement (TPPA) negotiations. Groser claims that the secrecy veil over the TPPA negotiations is necessary to prevent “full disclosure [because it is] likely to lead public debate on an ill-informed basis”.

However, thousands of New Zealanders, who have been following the Trans-Pacific Partnership issue for several years, know that with this deal transnational corporations will gain a one-way mechanism to sue the NZ government in secret tribunals over any laws, treaties and oversight that their wealthy owners deem to impede their expected future profits.

Below are details for the Nationwide Rallies & Marches for Saturday August 15 (and other actions) to oppose the TPPA (Trans-Pacific Partnership Agreement). Click the embedded links for more details, including localized flyers and posters. See attached Flyers and Posters for the Auckland Aug. 15 Rally & March 1PM (Theme: ‘Democracy is Dying’ – Street Theatre).

Please share this information by email, social media and print. A thousand flyers can be distributed on your half-hour walk through your neighbourhood.

And come walk on the day, even if it’s simply to learn what the criticism is, to see the nuances of the issues that the news media misses, or to experience grown-ups protesting in a safe, spirited creative way!

These details are subject to change and events may be added to this list, so make sure you check in on www.itsourfuture.org.nz for the latest updates ahead of TPPA Action Week. If you want to organise something in your area, please contact edwardcrmiller@gmail.com. 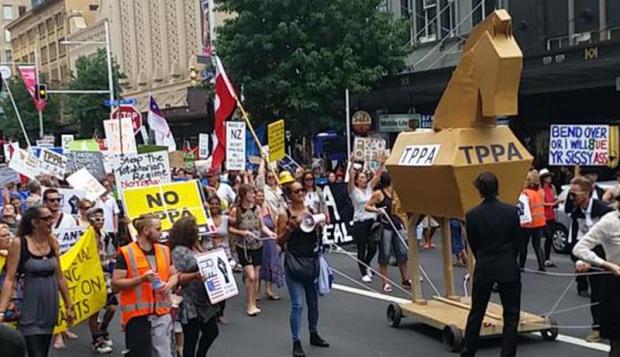 15 August, gather at Memorial Park at 9.30am to create/share placards, then walk through market and main street.

15 August protest, meet outside Kerikeri library at 11am.

15 August protest, Meet @ 1pm outside Cock and Bull carpark on corner of Church and Maui.

13 August, signs on the road side

15 August protest at 11am, location TBC.

8 August protest, 1pm, march from Silver Ball in the market to Majestic Square.

14 August will be a concert in the library at 5pm, then documentary maker and investigative journalist Bryan Bruce will speak at 6pm on Poverty, Inequality & the TPPA.

Many committed P North activists will also be heading to Wellington on 15 August.

12 August – Lunchtime rally outside Parliament with politicians and speakers.

15 August – TPPA Walk Away! Protest action to stop the TPPA. Assemble at Midland Park at 1pm and march to Parliament for speakers and music. More details to come.

12 August film screening of ‘Inequality for All” by economist Robert Reich, 6pm at The Auricle (35 New Regent Street).

15 August protest at 1pm, marching from the Dental School to the Octagon. 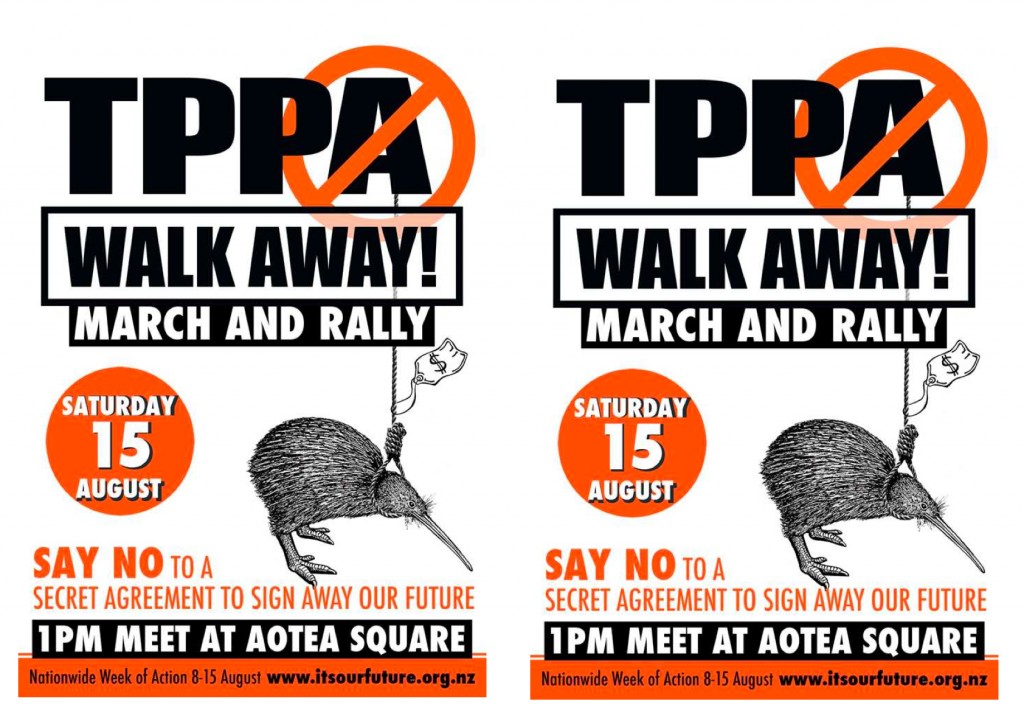 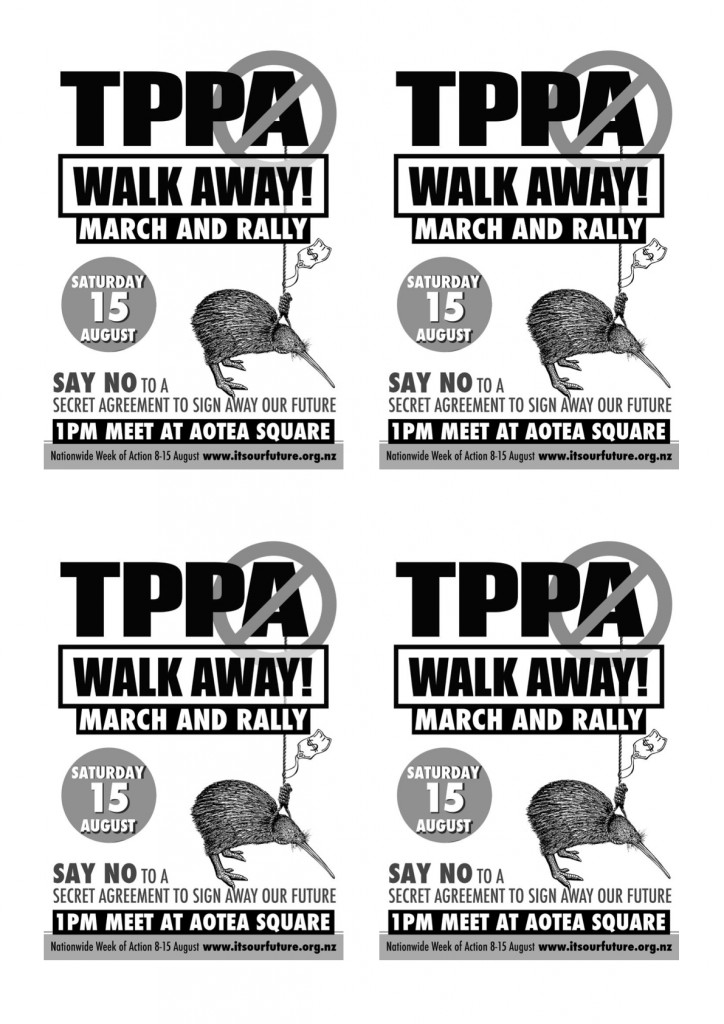 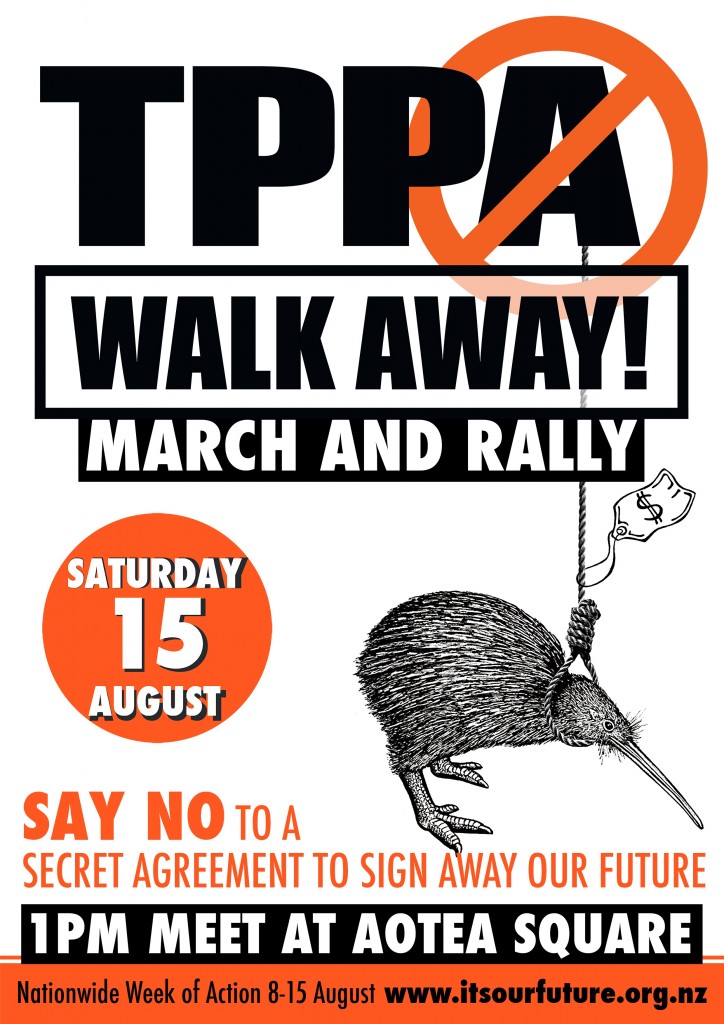