Far from being the neutral observers and innocent bystanders that they pretend to be, the Establishment Media and their favoured Professional Commentariat play a seamless strain of ‘The Hunger Games’ with politics and political polls to distract from genuine solutions to the crises that stress New Zealand society. Boring into the Media Establishment’s wooden construction of the ‘Jacinda Effect’,  Steve ‘Snoopman’ Edwards finds that the Establishment Media always wears kitten mittens when they box with rich, white, male big cats.

A Re-Work of the Political Playbook for 1984?

The sky-rocket ascent and popularity of the new Labour Party leader, Jacinda Ardern, is an excellent example of the role that the media, polling companies and professional commentariat play in re-constructing ‘reality’.

Ardern, along with her Labour Party, has been the beneficiary of an incredible supply of positive coverage from the news media. Its speed, suddenness and scope has been so spectacular, it is like it came from the Political Playbook for 1984 when big business shifted its allegiance from National to Labour to get stealthily planned free market policy shocks implemented.[1] [See Part 4: The Elephant in Every Labour-Political Delivery Room is a Crying National Shame].

In effect, Ardern’s sky-rocket accent is a policy shock for the rival National Party, that has ruled the New Zealand Realm on behalf of its rich-lister clique since late 2008.

When a political poll showed that the moderately-difficult Labour Party led by Andrew Little[2] had allegedly dropped to its worst popularity in three decades, or 24%, he was asked by TVNZ’s political editor Corin Dann if he had thought about resigning. Little told Dann that he would be “lying” if he said that he hadn’t.[3]

On the surface, Little’s characteristic trait for honesty – albeit within the bounds of acceptable political discourse – in this moment, was his undoing.

However, the Media Missionaries and Professional Commentariat had for more than a year hounded Labour Party leader Andrew Little for lacking what they deemed as the most important quality for a political leader – charisma – over all other human traits.[4] Additionally, the Green Party had received a boost in popularity after their co-leader Metiria Turei made an admission in mid-July that she had, in effect, used the Domestic Purposes Benefit as an unconventional funding mechanism to study law while she was a young mother.[5]

But, after a vitriolic backlash from a large chunk of New Zealanders who hate the Greens – with the Establishment Media and Professional Commentariat playing their inglorious part[6] – the death knell for Turei was rung by Newshub who ferreted into the Habitation Index. This largely unknown register of where Kiwis, Iwis and Greedies nest, showed solo-mother Turei was listed at the same address as her daughter’s father, Paul Hartley, in both 1993 and 1994.[7] It turned out Turei had registered herself at the Mt Albert address because a friend was running as a candidate in that electorate long-held by Labour Party MP Helen Clark.

Following the scrutiny into Turei’s past, the Greens slumped in the influential OneNews/Colmar-Brunton poll from 15% to 4% share of the party vote, while the Labour Party magically surged 13% from 24% to 37%.

According to New Zealand Herald political reporter, Audrey Young, Turei would have survived if she had managed her ‘confession’ better.[8] This is a way of saying that the Establishment Media’s missionaries and their favoured Habitation Index of Thinkerati judge the performance of rituals and weigh up whether the players in the lens are expendable to the ruling power structure, like they’re commentators of ‘The Hunger Games for People with Profiles’.

If the same standard were applied to former-Prime Minister John Key, his political fraud to turn-off left-wing constituents and young people from voting by advancing the dirty political attack strategy set-up by Sir Donald Brash’s advisors Crosby|Textor, then the National Party would have been sunk during the election campaign of 2014 after journalist Nicky Hager exposed it. However, the Establishment Media avoided spelling-out the intent behind constructing a dirty attack political attack environment to their news audiences in their lead story coverage of the Dirty Politics scandal prior to the 2014 General Election.[9] Therefore, the Establishment Media newsrooms’ Fingers of Blame are permanently crooked!

Moreover, the mainstay of rituals performed by New Zealand’s media missionaries is their neutral observer posture, a constructed position at the ‘centre of society’. Polling companies perform a similar function, projecting an air of robust objective scientific surveys, when in fact they work hand-in-glove with the propagandist media temples and Tax Flock-dominating political parties to do expensive polling work that displaces context-rich journalism and circumscribes a vision for the bona fide emancipation of New Zealanders.[10] The Professional Commentariat play their conformist role too, providing a range of views that seamlessly mixes opinion, carefully constructed spin and self-policed thoughts all framed within the bounds of acceptable ideas to maintain their place on the Thinkerati Habitation Index. 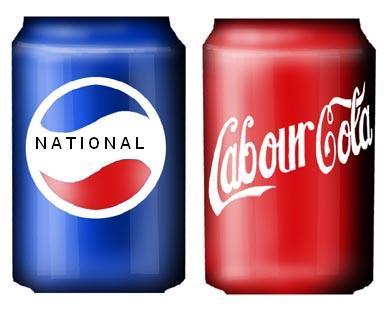 The Thinkerati work together to meet the media’s propagandist need to construct the appearance of balance, accuracy and fairness. This means it is the Professional Commentariat’s role to help the newsrooms perpetuate their dirty habit of blowing the minor scandals, embarrassing smears, and gaffs out of proportion. In this way, the Thinkerati assist savvy media missionaries to pass the ‘political hygiene test’ – a well-worn public relations spin-tactic.

But, the logic underpinning Jacinda Ardern’s sky-rocket ascent – dubbed the ‘Jacinda Effect’ – is more than just about providing the appearance of diversity in the propagandist media system, so that it can re-furbish the façade of a robust democracy.[12] A case in point is the news media’s complicity in failing to nail John Key for his political fraud to win power three times.[13] That save demonstrated that the Establishment Media’s Cathedrals, Churches, and Chapels act as a mechanized armoury in the machinery of state, as Nation Business Review reporter Nathan Smith opined more generally.[14]

It is the Pakeha-dominated ruling classes’ job to keep the Neo-Colonial New Zealand state free of mutiny – despite its crisis-ridden condition. Because the Pakeha-dominated Establishment Media are crucial to crisis management, they never box with Cassius Clay/Muhammad Ali boxing gloves in bouts with vital persons or institutions of the Establishment. The Establishment Media – MediaWorks, Fairfax Media, NZME, Sky and TVNZ – always wears kitten mittens when they box with the big cats. It doesn’t help that all of New Zealand’s privately-owned major media companies are owned by financial institutions, that Crown-owned TVNZ is corporatized, and that MediaWorks produces Prime News for Sky.[15]

Anytime members of the Establishment are scapegoated, it is because they have been  deemed as expendable to resolve a crisis for the ruling class.

Therefore, the resurgence of Labour is due to the Pakeha-dominated ruling classes’ need to deal with social stability through cosmetic adjustments.

It would be politically implausible for a National Party-led government to make cosmetic adjustments on poverty, housing un-affordability, homelessness, and education, in the absence of strong political competition.

Labour’s resurgence is also to do with the political expediency in throwing a hospital pass to a new government. In a country beset with multiple crises, the next government will likely be bombarded, as bubbling-under scandals – like the looming Sky City Convention Centre Financial Blow-out 2.0 – as they spiral into full-blown crises. The crises that compound stresses for the Kiwi-Iwi Tax Flocks include: a Poverty Crisis, a Housing Affordability Crisis, a Food Affordability Crisis, an Education Crisis, a Health Crisis, a Natural Environment Crisis, a Cartelized Business Environment Crisis, an Infrastructure Crisis, a Debt Crisis, and a looming Global Financial Crisis of epic proportions.

But what Labour Cola’s resurgence really shows is a phenomena that the CIA have long-known, it only takes a month to indoctrinate a population.

Winning power is only one battle in the political fight of a party’s life.

Recognizing we have all been brain-washed is the first step in Aotearoa’s emancipation from the political fraud of the City of London-Westminster Parliamentary system.[16]  To avoid taking this step is to choose to remain trapped in an abusive domestic relationship, confused by a maze of lies designed to keep us weak, and preyed upon as a colony of Tax Kiwis and Tax Iwis whose nest eggs are routinely stolen, broken and devoured by devious in-bred foreign and home-baked pests: the Greedies.

Part 2: A Billionaire’s Pep-talk to the ‘Switzerland of the South’

The Media Establishment’s wooden construction of the ‘Jacinda Effect’ glosses over a deep structural crisis for Neo-Colonial Capitalism in the New Zealand Realm. A billionaire’s intellectual support to National’s strategic partner, the ultra-far right ACT Party, signals a desire of Big Business Beneficiaries to push through more market solutions to the crises created by ‘free market’ economic shock therapies that the Lange-Labour Government  and  Bolger/Shipley-National Government deployed to create a top strata of super-rich New Zealanders.

Part 3: The Elephant in Every Labour-Political Delivery Room

Steve ‘Snoopman’ Edwards presents an unsanitized outline of why, how and who exactly subjected New Zealanders to Shock Doctrine policies that were designed to transform New Zealand into a ‘Switzerland of the South’ through strategic sabotage from 1984 onward.

Steve ‘Snoopman’ Edwards is a Pakeha news editor. When he was 10, he had an epiphany that grown-ups repeat the words of People on TV, without realizing they have been brain-washed to believe what they speak are their own opinions.

[3] Corin Dann. (July 30 2017). Full interview: Andrew Little admits he ‘thought about’ stepping down as Labour leader in the interests of the party. https://www.tvnz.co.nz/one-news/new-zealand/full-interview-andrew-little-admits-he-thought-stepping-down-labour-leader-in-interests-party

[8] Audrey Young. Echoes of Clark, Key in Ardern elevation; Audrey Young (9 August 2017). Turei resigns without the slightest concession what she did was wrong. http://www.nzherald.co.nz/nz/news/article.cfm?c_id=1&objectid=11901150

[12] It was known from overseas experience that dirty attack politics benefits right wing parties such as the National Party, while it hurts left-wing ones more, because it is known to turn off left-wing citizens and young people from voting first, as Key admitted in a pre-recorded interview on Campbell Live two days after re-winning power on 22 September 2014! SEE: John Campbell. (22 September 2014). Campbell Live. TV3. See also: The Nation. (27 September 2014 Edition). TV3; “John Key’s outlook, goals for the next three years”  Read more: http://www.3news.co.nz/tvshows/campbelllive/keys-outlook-goals-for-the-next-three-years-2014092220#ixzz3Fh3wIpal