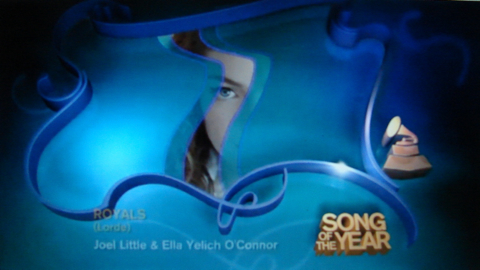 The singer-songwriter Lorde shocked USA America’s music industry when accepting her second miniature gold-coloured gramophone for the night at the 56th Annual Grammy Awards on Sunday January 26 2014 in Los Angeles, California. The shock was not because the singer-songwriter won two Grammy awards, Best Solo Pop Performance and Song of the Year, for her hit single ‘Royals’.

Rather, it has emerged that Lorde delivered a lecture-like speech that was a scathing indictment of global capitalism. But, the apparent ‘live’ broadcast had a one-minute delay and was switched to a ‘rehearsal take’ that had been shot earlier.

All of the nominees had been filmed earlier as a precaution, so that if any winners talked for too long or if their speeches or outfits revealed contents that breached its censorship rating, the Grammy’s studio could edit such moments without the wider world being any wiser. The near-seamless insertion of the ‘rehearsal take’ occurred after a wide-shot of the auditorium as Lorde, and her Grammy co-winner Joel Little, made their way up the steps to the stage.

Evidently, Lorde, whose real name is Ella Maria Lani Yelich-O’Connor, was miffed about the introduction of a ‘rehearsal take’ and prepared a lengthy speech. Yelich-O’Connor’s unexpected oratory nuclear-bomb shell nearly exploded the subterfuge of the ruling class both present and absent, and that of their media-guardians that watch over the White House-Hollywood Military-Media Complex.

The video, which initially kept getting taken down on You Tube, (and is currently going viral on the web), shows that at first the elite of the USA America music industry gathered at the Staples Center, a sports stadium, laughed, when Lorde said in seventeen year-old Emo-speak, “Thankyou everyone soo much for making this song explode because this world is mental.”

However, as Lorde, who is from the South Pacific nation of New Zealand, continued, she split her audiences’ mirthful consensus in half like Ernest Rutherford let loose in an atomic laboratory. “Planet Earth is run by psychopaths that hide behind slick marketing, ‘freedom’ propaganda and ‘economic growth’ rhetoric, while they construct a global system of corporatized totalitarianism”, said the singer-songwriter as she eyed the music industry audience.

When the cameras cut to the audience, the mood in the room had swiftly changed as the mental atom-ripping shockwaves smashed past their inner ears to their frivolous pop-culture loving brains.

The sequence of shots showed there was a mixture of emotions from hearty-joke enjoyment and uncomfortable status-conscious giggles, to gob-smacked compliant shock and, most entertaining of all, outraged anger emoticon-like faces, that gave the sense of being mentally-wired to stock-market indices and law-suits. The giggling music stars included Katy Perry and Beyouncé, who were both busted by cameras snatching looks at incensed people who are paid a lot to care about USA America’s music industry cartel, which is dominated by a handful of transnational corporations.

Yelich-O’Connor told her captive and now quiet audience that a USA American journalist called Chris Hedges had recently reported that a corporate form of totalitarianism was responsible for what she said the news media was hiding: the rapid militarization of the planet to gain permanent dominance over the world.

The newly-gonged singer-songwriter implored the audience to see a comparison between today’s capture of power by the super-rich and the politically and militarily powerful, and capture of power over city states and nations by monarchies in former times. It was a scene reminiscent of the marionette puppet movie, Team America, wherein Broadway actor Gary Johnston, who is the newest recruit to the paramilitary anti-terrorism force, Team America, implores an audience of world leaders to unite against terrorism by drawing on a philosophical speech that a drunk had told him in a bar. However, the puppet Gary Johnston had failed to research USA America’s history in state-sponsored terrorism, whereas Lorde had done her homework. She appeared to be attempting to use the media propaganda system to reach the mass audience, rather than those that filled the room.

“Can we not imagine that in past times”, said Lorde, eyeing her music contemporaries in the front rows, “simple folk found it hard to work out exactly how they were being manipulated by the Royal monarchies, and the Papal monarchy, who claimed a ‘divine right to rule’? Ordinary people from classical times, through to the demise of the Ancien Regime could not see how the rivalrous network of elites and oligarchs were linked, not least because the illiterate masses were indoctrinated to believe in their humble lot, to obey divinely-endorsed authority and to live in fear of damnation.”

At this point, many were enjoying the unexpected lecture from pops’ newest Queen pip-squeak. “So, in today’s mental world, it should become clearer now that Planet Earth is ruled by super-wealthy people, who use their outrageous fortunes to steer the trajectories of whole societies for their own material and political gain.”

“Only ‘Queen Bee’ Lorde could have said that”, said a New Zealand university professor of the History of Nearly Every Hierarchical Civilization Since Sumeria, Dr. Harry Hiveman, who unofficially mentored Yelich-O’Connor in capitalism’s “dark-side” in 2011. Hiveman, who gives the academic habit of making rabbit-ear marks with his index-fingers when speaking in euphemisms and using jargon, refers to capitalism as “the death star”.

Yelich-O’Connor “followed her nose” one summer day in early 2011 as Dr. Hiveman was in his office preparing for the start of the university year. The singer-songwriter, who grew up in a posh vintage North Shore suburb called Devonport in New Zealand’s largest city, Auckland, was looking for answers to “but, why?” questions buzzing in her mental space to do with economic inequality she had noticed on ‘the North Shore’.

“Because she found me, and was willing to do what few Gen Y’ers are willing to do – read during their holidays about ‘doom and gloom’ stuff – she was able to let her mind explode on that sports stadium stage three years later”, said the Auckland University professor.

Cynthia Overlord, who is the director of Limelight, a network marketing company that sells female fashion products, including make-up, enthused about Lorde’s suppressed Grammy speech. “Her fearlessness to say what all Aotearoans of her generation are thinking is why she deserves to led the sales surge in purple finger-nail paint”, beamed Overlord, who made smiling look hard.

Aotearoans are middle-class New Zealanders who have been indoctrinated by mainstream media missionaries to believe that because they regularly follow ‘the news’, this makes them well-informed. The term references Aotearoa, which is the original native Mäori name for the North Island of New Zealand and translates to mean ‘the land of the long white cloud’. ‘Aotearoa’ is now commonly used to refer to the whole country because the climate has changed to windy overcast days during the brief summer holiday break when most New Zealanders go ‘outside’.

Hiveman, who was once married to Overlord, sniggered when he heard Overlord “try to spin” Lorde’s speech into a marketing opportunity for Limelight to exploit the ‘Lorde-look’. “Does Cynthia Overlord really believe that Lorde’s purple finger-nails have the magic to solve Aotearoans’ inter-generational malaise”. (Upon divorce, Cynthia Hiveman resumed the use of her family name, Overlord).

Overlord is the chairwoman of the Aotearoa Rich Reaction, a group that promotes consumerism as a means to sustain prosperity based on the idea that spending keeps everyone in jobs and therefore well-off and happy.

“I think”, continued Hiveman, smiling as he began to rant, “Cynthia and the well-meaning people who support Aotearoa Rich Reaction are misguided if they believe that such fleeting boosts to consumption will lift their middle-class lifestyle boats. Their snobbery and squeamishness means they avoid at all costs having their deluded consumerist bubbles burst, even when it’s spelled out to them. Like typical bourgeoise, they don’t want to admit that long-term, their strategies for financial independence are ultimately futile, as long as the criminal groups running the world are left intact.”

Hiveman says Aotearoans, like their bourgeoise counterparts in Australia, the United States, the United Kingdom and Canada, would rather get cancer than acknowledge a new economic war has been in play since the early 1970s.

He paused. “They like to believe that their kids are better educated. In a way, some are.”

“But”, qualified Yelich-O’Connor’s mental-buzz mentor, “they also have sanitized history to misinform their bourgeoise worldviews”.

Journalist Iggy Swind has worked alongside reporter Clark Kent at the Daily Planet and photojournalist Peter Parker at the Daily Bugle. Swind’s investigations proved both super-heroes work undercover for the Hollywood media cartel to distract mass audiences with their mediocre ‘saving the world’ action sagas, leaving those that run the world at-large. Those investigations have been suppressed.

See the inside story behind Lorde’s epic rise “Queen Bee Mentor: The professor who fed Lorde’s mental buzz” at https://snoopman.net.nz/2014/02/11/clipping-queen-bees-wings-lordes-real-grammy-speech-suppressed/