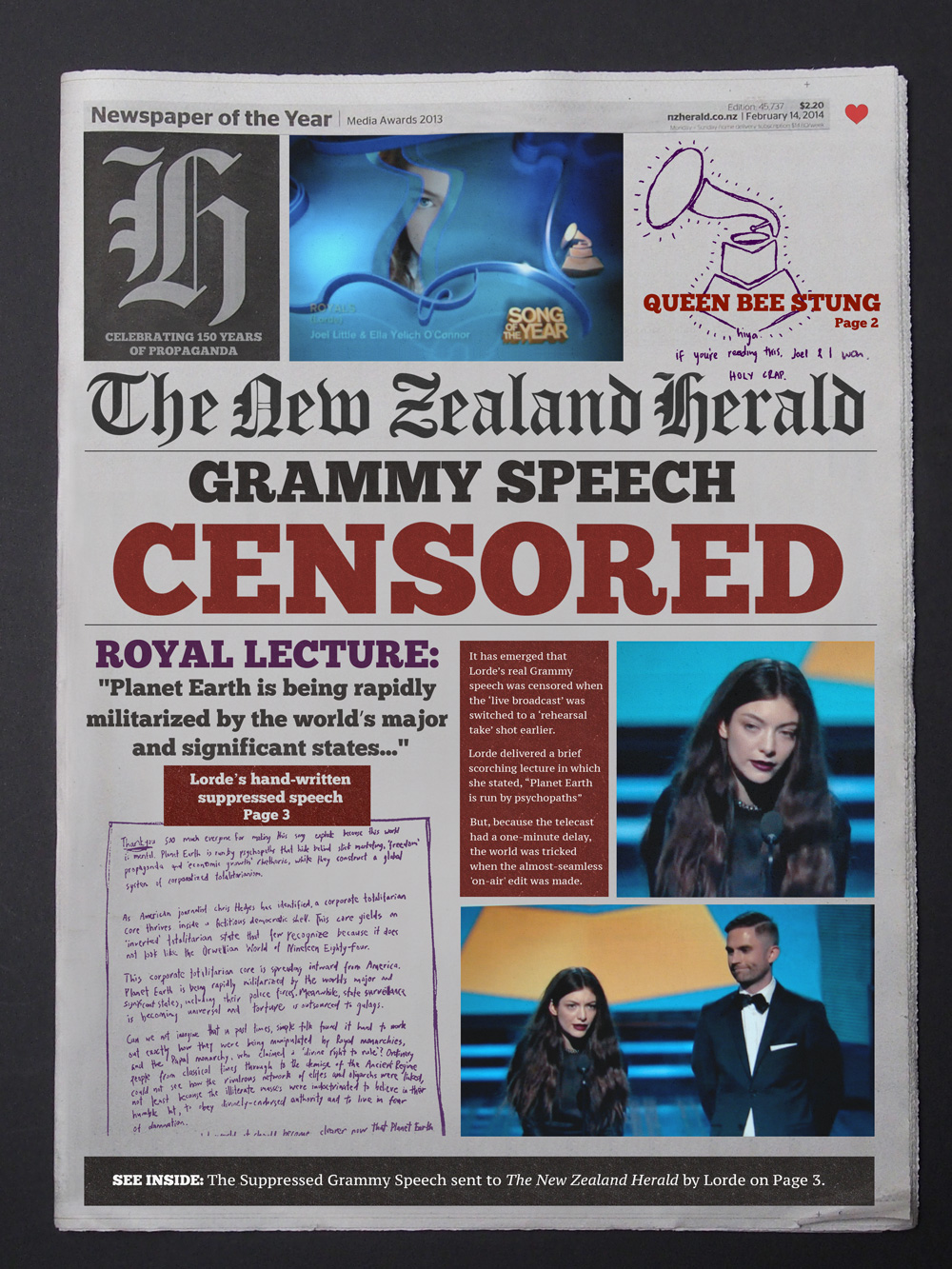 The New Zealand Herald is the first major news outlet in the world to publish the suppressed speech. But, The New Zealand Herald presented the story on the front-page as though the ‘national’ newspaper had the scoop that Lorde’s Grammy speech had been censored. (See: Grammy Speech Censored). The teaser line at the bottom invited readers to view the full speech “sent to The New Zealand Herald by Lorde”, while the accompanying article, “Queen Bee Stung” on page 2 implied that the newspaper had published the hand-written speech as soon as they confirmed it was genuine.

Snoopman News reported that Lorde shocked the Grammy audience with a lecture-like speech that was a scathing indictment of global capitalism. Lorde told the audience that the world was ruled by well-resourced, highly networked super-rich people who use their “outrageous fortunes” to employ “[a]rmies of professional, political, religious and military elites” to make the world secure for their power structures.

But, the apparent ‘live’ broadcast had a one-minute delay and was switched to a ‘rehearsal take’ that had been shot earlier when it became apparent that Lorde was not going to waste the opportunity to outline why the world needs to remove the planet’s ruling classes from power, by thanking people already listed on her album, Pure Heroine.

The Grammy studio had taken the precaution of shooting ‘rehearsal takes’ for all of the nominees, so that if any winners talked for too long or if their speeches or outfits revealed contents that breached its censorship rating, such embarrassing moments could be edited.

A typed copy of the censored speech was initially sourced from Lorde by Snoopman News after the singer-songwriter returned to her home economy, New Zealand, and realized there had been a media black-out. The story “Clipping Queen Bee’s Wings: Lorde’s real Grammy speech suppressed” went viral over the internet after Snoopman News published the scoop on February 6. The same day, Snoopman News also published a transcript of the speech, complete with citations, that shows Lorde had backed her attack on the world’s rulers with solid research.

A video of Lorde delivering what was described as an “oratory nuclear-bomb shell” by the journalist that broke the story, Iggy Swind, initially kept getting taken down on You Tube, (and is currently going viral on the web). The video shows that at first the elite of the USA America music industry gathered at the Staples Center, a sports stadium, laughed, when Lorde said, “Thankyou everyone soo much for making this song explode because this world is mental.”

However, the video shows the mood quickly changed as the composed singer-songwriter continued unfazed, despite having just won two Grammy awards, Best Solo Pop Performance and Song of the Year, for her hit single ‘Royals’.

“Planet Earth is run by psychopaths that hide behind slick marketing, ‘freedom’ propaganda and ‘economic growth’ rhetoric, while they construct a global system of corporatized totalitarianism”, said the singer-songwriter as she eyed the music industry audience.

Lorde told her captive and now quiet audience that a USA American journalist called Chris Hedges had recently reported that a corporate form of totalitarianism was responsible for what she said the news media was hiding: the rapid militarization of the planet to gain permanent dominance over the world.

To scoop, or not to scoop

Lorde had sent a copy of the Grammy speech to The New Zealand Herald before she scooped-up the two Grammies. The ‘national’ newspaper was meant to publish the speech if Lorde won and spoke what was really on her mental mind to the elite of the USA America music industry.

But, following the Grammy studio’s on-air censorship of Lorde’s speech, an “executive decision” was made at The New Zealand Herald to shelve the hand-written copy. Lorde’s speech evidently sat on top of a filing cabinet in the newsroom, where it languished for two and a half weeks.

So, in a way, The New Zealand Herald did have the scoop of Lorde’s censored Grammy speech. However, the speech, which was written with a purple eye-liner pencil, was published by The New Zealand Herald in response to a ‘Full Transcript’ copy that had also gone viral on the internet this week. (See: lordegrammyspeech) 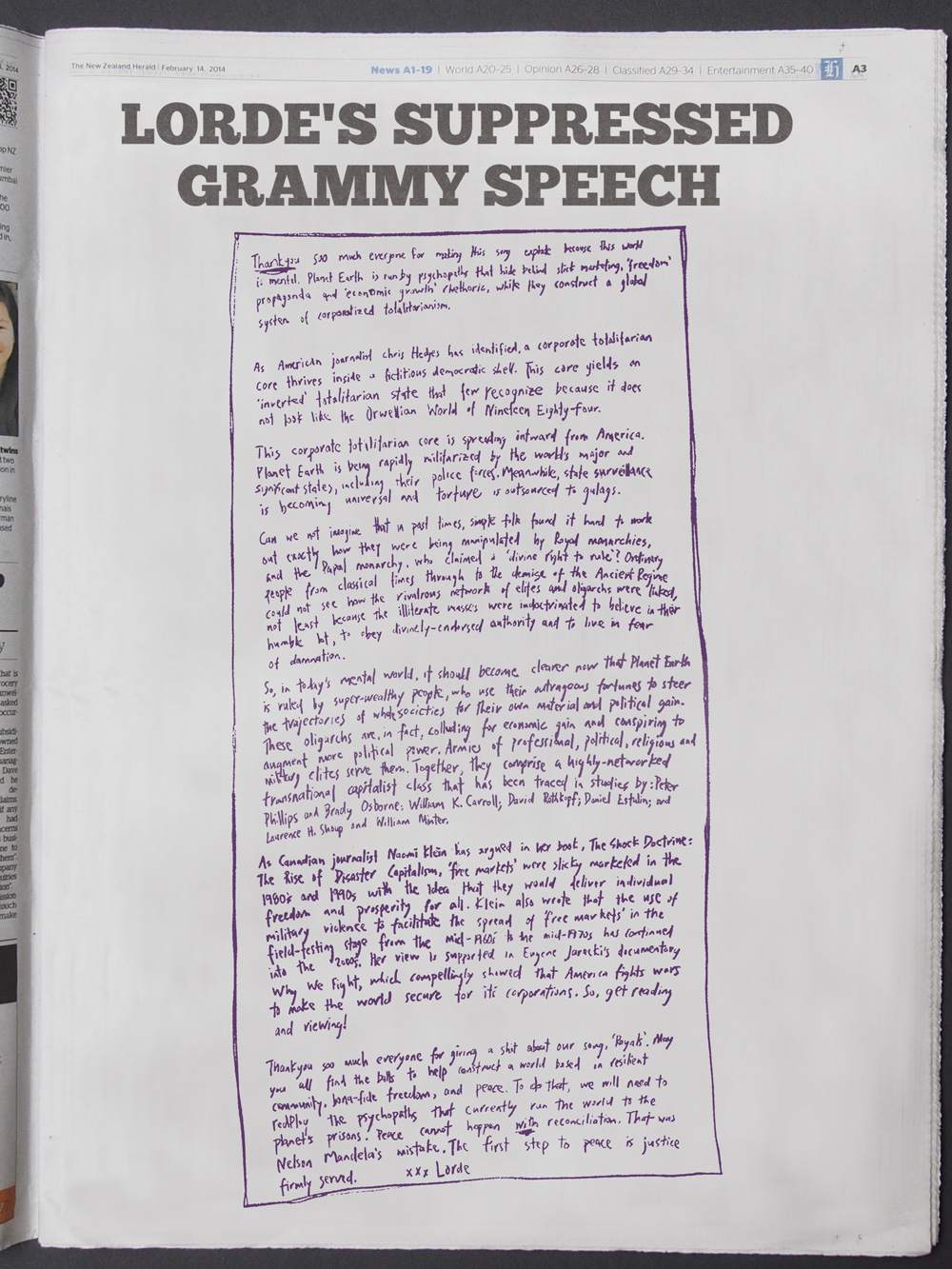 Filtering the News: The speech The New Zealand Herald left on top of a filing cabinet to gather dust.

The scoop, “Clipping Queen Bees Wings: Lorde’s real Grammy speech suppressed”, by Snoopman News, and the accompanying ‘Full Transcript’ has drawn over 1,000,000 visitors to the up-start news outlet’s website since launching its Facebook page “Snoopman News” on Monday February 10. The story spread mostly via Facebook and has been re-posted on multiple blog-sites.

New Zealand Herald editor Shayne Currie said defensively, “We had to print Lorde’s censored speech because our shareholders started screaming at us down the phone saying ‘why didn’t you get this scoop?’ ” (See: Grammy Speech Censored). The newspapers’ investors had seen the ‘Full Transcript’ of Lorde’s suppressed Grammy speech on their Facebook news feeds and had lamented the lost advertising revenue and the forgone sales to the mediocre daily.

Currie said he got hot under the collar, not least because The New Zealand Herald never publishes the likes of Lorde’s speech, or other well-researched arguments, on its front-page. “That would give-away a ‘big-picture’ view of the private political system that uses economic means as its form of social control, capitalism”.

Usually investors are risk-averse to such exposures, but said Currie, “The Herald has been leaching readers because we’ve bent and stretched the boundaries of the mediocre so far, New Zealanders are realizing they can’t take anymore of our Holy ‘free market’ Crap”.

In a conference call with The New Zealand Herald‘s owners, Currie answered-back. “I said to the investors, “We didn’t print the hand-written speech at the time, because our news is driven by focused-group survey formulas, the regurgitation of corporate-biased syndicated feeds from other transnational news corporations, and press releases curried into something resembling stories to fulfill our end of the low-level bribes we receive from PR companies on a daily basis,” Currie proudly confided.

At this point in the interview, Currie misread my surprise that he was being so candid, for a social-media era ‘Like’ that he had been ‘ballsy’. He added, “In a news market where there’s only four major players, a cartel if you will, we had an obligation to our investors to try to steal the thunder of bloody Snoopnews or whatever it’s called, because undermining new market entrants is part of the cartel game”.

The newspaper editor stated that when a famous seventeen year-old school-girl essentially explains that to be super-rich, a vast pool of poor people is needed to work in a massive web of transnational corporations, it made his job as a media missionary for global capitalism more tricky.

Shayne Currie’s missionary work became trickier this week when two Samoan cleaners had found Lorde’s penciled speech one evening on a filing cabinet in The New Zealand Herald’s newsroom, just as news of its suppression was going viral. According to The New Zealand Herald editor, the cleaners, who are spouses, had taken “selfies” on a cellphone with The New Zealand Herald’s copy of Lorde’s hand-written speech and posted them on Facebook. Currie worries that the couple will become ‘celebrity cleaners’.

“It was a bit of an embarrassment because they took it in reception with The Herald’s branding behind them”, acknowledged Currie the way sheep would if they could speak Kiwilish.

In the silence, he added, “Besides, we would have looked like eggs if we didn’t print the speech.”

“It’s going to make it harder to keep up the ‘free market’ propaganda, when we’re going to be known for employing Samoan ‘celebrity cleaners’, who hold-down six jobs between them to put food on their family. And, as the New Zealand economy’s leading newspaper, whose Samoan ‘celebrity cleaners’ knew a scoop when they saw it and became famous for posting pictures of themselves on Facebook with the censored speech found on the filing cabinet in our newsroom”, moaned Currie.

Still, he said cheering himself up, “when you get gems like this quote from the Samoan cleaners, there’s value in printing them because its rebuilds your audience when you’ve lost legitimacy”, said Currie grinning over his i-Phone.

And then a sinking feeling came over Currie’s face when he suddenly realized that he had confided too much.

American journalist Sophia Bigg-Storm tried to break the story that World I and World II were conjured by an Anglo-American Brotherhood who conspired to dominant the world by controlling oil and finance, through a system enforced by military aggression, subversion and other intrigues.  Her sleuth-work was supported by William Engdahl, author of works such as, Gods of Money and A Century of War; and also by Guido Giacomo Preparata, who wrote Conjuring Hitler. Bigg-Storm’s investigations were suppressed by her former employer, The National Enquirer, a fictional newspaper depicted the movie Citizen Kane.

See the inside story behind Lorde’s epic rise – Queen Bee Mentor: The professor who fed Lorde’s mental buzz at https://snoopman.net.nz/2014/02/11/queen-bee-mentor-the-professor-who-fed-lordes-mental-buzz/